I am Glenys Everest, and I am married to Neil.

I was born in Bradford, West Yorkshire, in the mid-sixties, and have since lived most of my life further down the county in Sheffield, home of the worlds greatest steel industry and half of the music that hit the charts in the 1980s

I began being creative from day one and was lucky to have a seamstress mother who also had a creative and productive “eye”.  She was also very handy with her Kodak box brownie, and I was always allowed to take a few “frames” whenever we went on holiday.

Imagine her surprise, however, when I decided to enrol on the city’s first ever Diploma course in Commercial Photography at our local college in 1981.  She thought I was nuts, as this was one profession most of the people in my family would never had thought existed North of London at the time.  However, I went on to get a National Design and Art Tech Diploma, and never looked back.

After many short-term jobs in the art, print and photo production trade, and also working Freelance (Weddings and Live performance work), I finally secured a permanent position as a Medical Photographer at what is now known as Sheffield Teaching Hospitals in 1991. Whilst there I qualified as a member of the Institute of Medical Illustrators going on to win awards and become a registered Healthcare Technician.

Joining the Everest clan. Then in 2005, I met my husband to be, Neil, and things suddenly got very interesting!

I learned that his father shared a love for the camera, and in fact had done the very job I had wanted to do myself when I walked through the doors of that college classroom 23 years previously: photojournalism. I later discovered he had been mainly a freelance Newsreel Cameraman, but that was the start of learning about his incredibly rich and varied life in the professions I respected so much.

I was at that time expanding my own image archive, whilst engaged in an additional part-time career singing in the local pubs and clubs.

Over the next few years I was asked to renovate some of my Father-In-law’s images using my Photoshop skills.  Eventually this led to having enough restored images to hold the first public exhibition of his festival work.  Since then these images (which now total in the hundreds) have seen most corners of the world – either in further exhibitions or as image sales and global licencing for all kinds of musical projects and media re-releases.

It gives me satisfaction to see these brightly coloured, almost “alive” images of the 1970 IOW festival being used in exhibitions around the world, and realise that the restoration work (after nearly forty years of storage) has made this possible, and that they are actually now there for so many other people to enjoy. 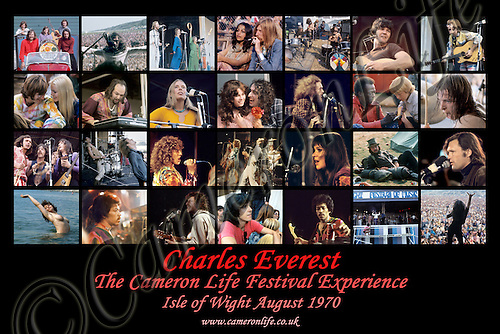 CameronLife’s “Now-Then” series of images have involved revisiting performers and capturing them on film over 40 years later. I particularly enjoyed this project as it brought back memories of photographing live performance work in the 1980/90’s.

A few years ago, chronic Illness forced me to cut back somewhat, and I gave up the singing, and became part time at the hospital, and I also had to cut back on some of the activities within CameronLife.

Now I am looking forward to an early “retirement” from the NHS and a future where I can spend more time being creative again and hope to offer my support to CameronLife once more.

This site uses Akismet to reduce spam. Learn how your comment data is processed.